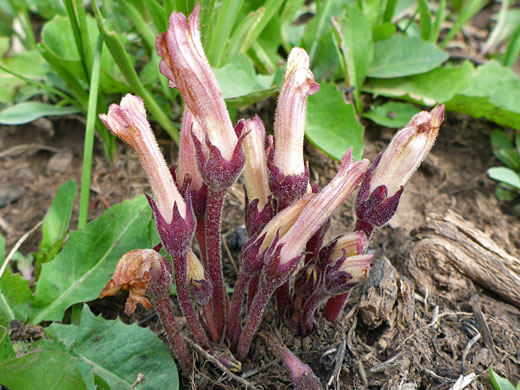 Orobanche fasciculata (clustered broomrape), Trail Point Trail, Boulder Mountain, Utah
Orobanche fasciculata is a common and widespread species, easily recognizable from its clustered appearance, with up to 20 flowers in a dense group. Like all members of this genus, plants are parasitic, and lack leaves; hosts for this species include sagebrush and saltbush. Flowers are attached by relatively long pedicels, up to six inches, lacking any bractlets; they arise from the short (up to 2 inches) stem, which is entirely or mostly underground, so they may have the appearance of separate plants.

Plants are glandular-hairy, including inner and outer surfaces of the corolla. The purple calyx is divided a little less than half its height into five triangular lobes, pointed at the tip. The corolla, around one inch long, is pinkish-purple to yellow in color, with five short, rounded lobes at the tip. Along the floor of the corolla are two hairy yellow nectar guides. 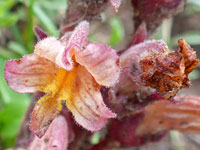 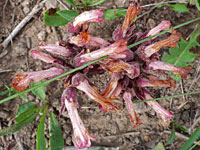 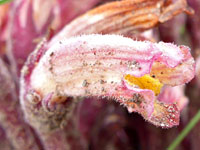