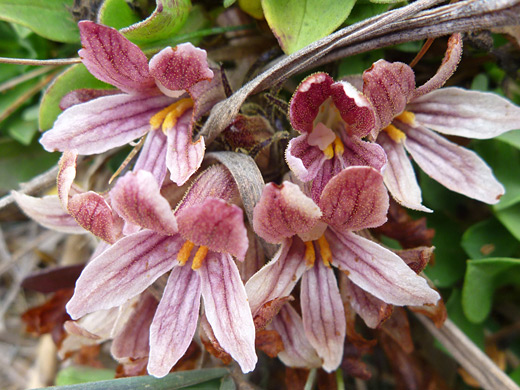 Orobanche californica is a parasitic plant, lacking leaves and chlorophyll. Stems and flower parts are colored various shades of pink to brownish purple, and are covered by short, glandular hairs. Stems may be single or multiple, clustered tightly together, and they branch readily.

The inflorescence is somewhat variable in shape; it may be elongated and relatively open, or denser, shorter and flat-topped. Flowers are formed of a five-lobed corolla, and a calyx which is also divided into five, pink lobes, linear to narrowly triangular in shape. The lobes are much longer than the fused part of the calyx below. The corolla lobes are colored light pink with darker pink veins. The flower center contains four short stamens and a longer white style, topped by a white, two-lobed stigma.

There are six subspecies of orobanche californica (condensa, californica, feudgei, grandis, grayana, jepsonii), often difficult to distinguish; identifying characteristics include corolla color, width and length of the corolla tube, shape of the corolla lobes and the overall plant height. 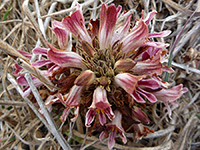 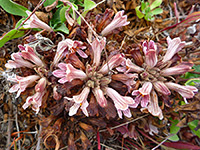 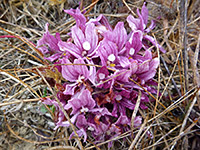