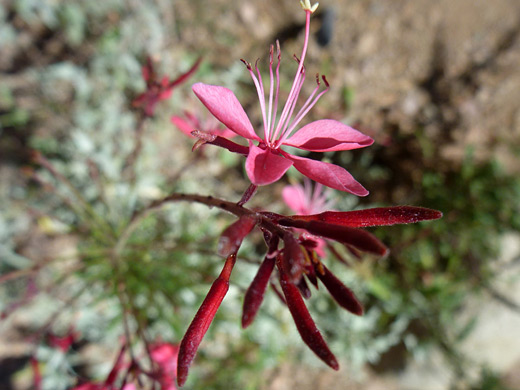 Reddish-pink flower - oenothera lindheimeri at the Desert Botanical Garden, Phoenix, Arizona
Oenothera lindheimeri is found over a small area of south USA, in southeast Texas and southwest Louisiana, plus small areas of the Gulf states further east. Plants grow tall, over 4 feet, and produce several, branched stems that have long, narrow leaves at closely-spaced intervals. Leaves have a reddish midvein, a somewhat shiny surface, a few small teeth along the margins, and a spike at the tip. Leafy stipules grow from the axils. Stems and leaves have a light covering of short, coarse hairs.

Buds are usually bright red, opening to rich pink, bilaterally symmetric flowers, consisting of four small sepals and four larger petals - two opposite, the other pair to one side. Eight long, light pink stamens project from the flower center, topped by darker-colored anthers, together with a slightly longer style, which has a four lobed stigma at the top. The flower color can also be white. 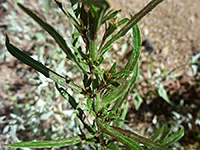 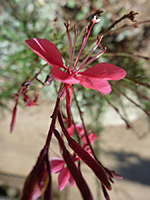