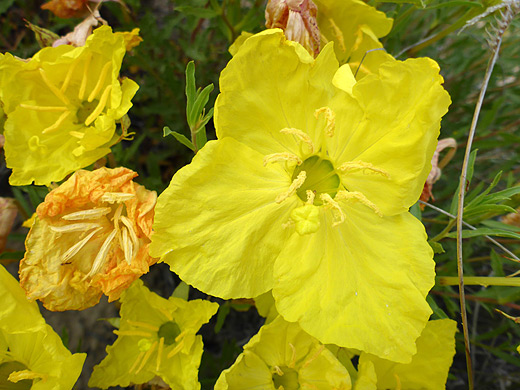 Mature yellow flowers - oenothera hartwegii along the Dome Trail in Big Bend Ranch State Park, Texas
Flowers of oenothera hartwegii, also known as calylophus hartwegii, are formed of four large, bright yellow petals, crinkly in appearance and widely obovate in shape, forming a tube at the base from which eight stamens and a style protrude. The stamens have a yellow filament and a relatively long yellow anther, fixed in the middle. The style is topped by a peltate (shield-shaped) stigma, attached at the center. Petals become orange then red as they wither. Sepals are green, flecked with purple on the outer surface, and fully reflexed when mature. The purple coloration is also evident when in bud.

Plants produce several stems, branching towards the top, and often grow in colonies, covering the ground for several square feet. Flowers form singly at the ends of the branches. Leaves are held at around 90 degrees to the stem. They are narrowly lanceolate or oblong in shape, with undulate margins. Stems have a light hair covering, most noticeable towards the top. 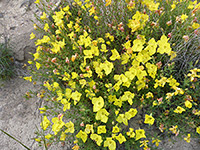 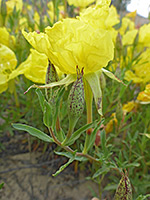 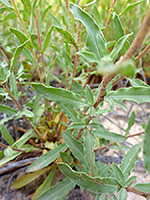