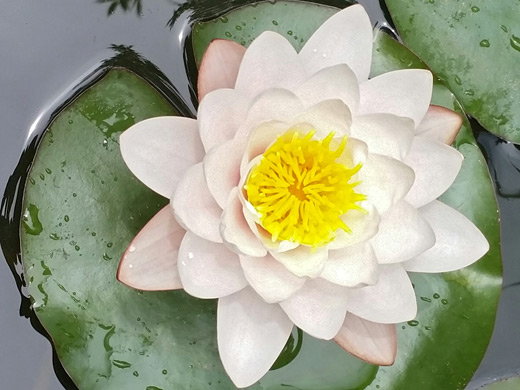 Nymphaea odorata, an aquatic species, is mostly found in the eastern US though has spread to small areas of the West, such as the vicinity of Flagstaff in Arizona, and in Butte County, California. Leaves are shiny and hairless, bright green on top but often purplish underneath. The two lobes below the attachment point often extend to the axis, giving the leaf a fully circular outline. Leaves are crossed by faint, lighter green veins, radiating from the center, numbering between 6 and 27.

Like the leaves, the flowers float on the water surface and are also large, up to 8 inches in diameter. Flowers consist of four small sepals, hidden below the larger petals, which are white to very pale pink in color, and number between 17 and 43. At the center is a cluster of up to 120 yellow to orange stamens.

Ssp tuberosa (mostly found in the Great Lakes region) has striped petioles and leaves which are generally green underneath, while for ssp odorata the petioles are not striped, and the undersides of the leaves are usually purple.