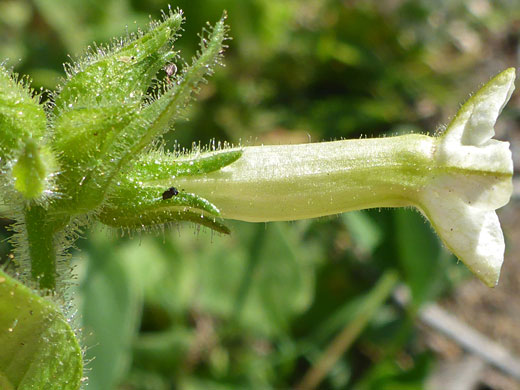 Nicotiana clevelandii (Cleveland's tobacco), Bayside Trail, Cabrillo National Monument, California
Lower stem leaves of nicotiana clevelandii are elliptic to ovate in shape, attached by stalks of up to 0.7 inches, while those from the mid-stem upwards are sessile, more lanceolate. All leaves are covered by transparent glandular hairs, of varying lengths, as are the stems, pedicels and calyces. This species is most common along the southern California coast between San Diego and Santa Barbara, across some nearby mountain ranges, and in far southwest Arizona.

Calyces, up to 0.4 inches long, are divided into four unequal lobes, one of which is longer than the undivided section. The greenish-white, sparsely-glandular corolla has a narrow, essentially untapered tube that opens abruptly to four fused, spreading, rounded lobes, each with a prominent midvein. Stamens are unequal in length, and are attached towards the base of the tube. Below the flowers are several lanceolate, leaf-like bracts, up to 1.2 inches long. 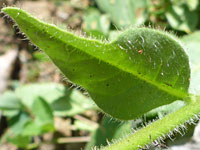 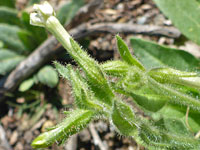