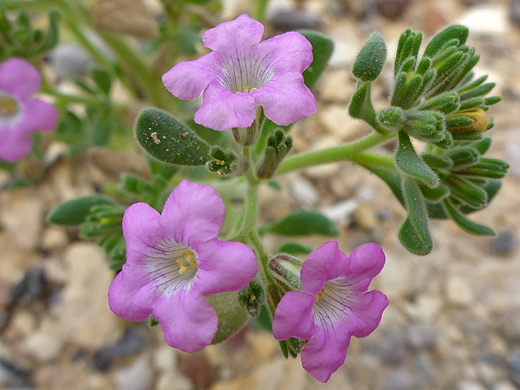 Nama havardii is one of the less common members of this genus, found only in four counties of west Texas (Presidio, Brewster, Terrell, Val Verde); Big Bend National Park is the main location. Plants are small perennials, found in open, gravelly sites, often alongside washes. Leaves are relatively wide, broader above the middle, and both surfaces are evenly covered with short, soft hairs. Leaf edges are sometimes folded downwards slightly, along the axis. Leaves grow all along the stems, and subtend the terminal flower clusters. Leaf margins are entire. Stems are erect, branching from the base and higher up.

Flowers have a five-lobed calyx, the lobes linear in shape, and fused only at the base, enclosing the white corolla tube, which opens to five rounded, pink (occasionally white) lobes. The inside of the corolla tube is marked by thin, dark veins. The five yellow-tipped stamens do not project beyond the end of the tube. 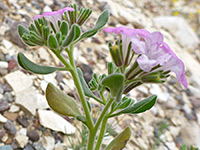 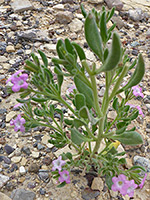