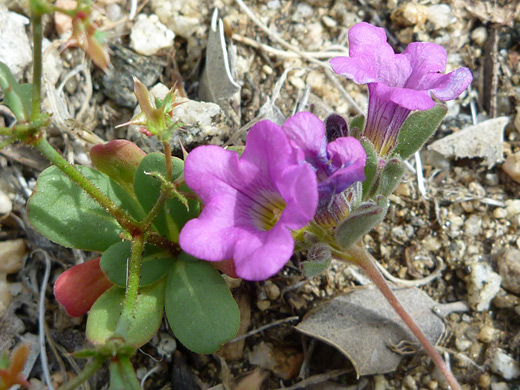 Nama demissum is a small, locally common, desert species, its short stems generally growing along the ground, but the flowers are relatively large and bright. Leaves are mostly basal, from where the branched, greenish-red, glandular hairy stems extend just a few inches, topped by a small cluster typically containing 3 or 4 flowers, each joined to the main stem by short pedicels and subtended by a few leafy bracts. Leaves are broad at the top, tapering gradually towards the base.

Flowers are supported by a calyx which has five thin lobes, fused at the base. From here, the corolla tube extends about half an inch, opening to five symmetric, purple lobes. The inside of the corolla tube is whitish in the middle, yellow around the base. Inside are five stamens of slightly different lengths, attached near the base and not exserted. Parallel, darker purple veins run up the corolla tube, fading away once they reach the lobes.

There are two varieties: var covillei has greyish-green, elliptic leaves, on short stalks, while the more widespread var demissa has green, spatulate leaves that have no stalk. 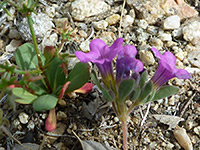 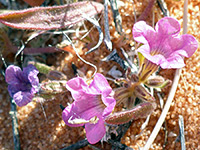 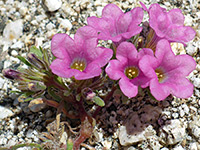