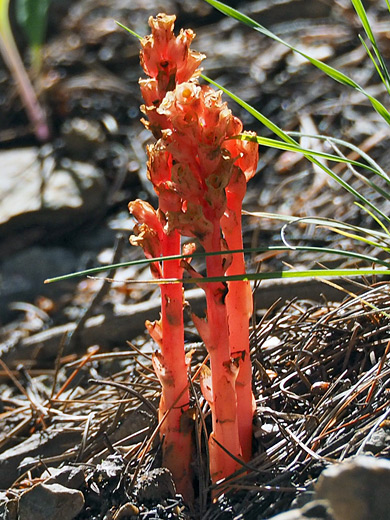 Like the few other species in this genus, monotropa hypopitys lacks chlorophyll and has no true leaves, just a few scale-like bracts (up to 0.4 inches long) at alternate intervals along the short, fleshy stalks which, like the flowers, are usually yellow but may also be pink or red. The color is darker for plants flowering later in the season. Plants are parasites, deriving nourishment from certain species of fungi, and they inhabit shady, most woodland.

The flowers, up to half an inch long, form in a racemic cluster at the top of the stalk, numbering up to 11; they initially point downwards, becoming upright when mature. Flowers are surrounded by small bracts, and are formed of four or five sepals, the same number of petals, ten short stamens and and a depressed stigma. The outer surfaces of the sepals and petals have a covering of short hairs, generally more dense for plants blooming later in the summer.