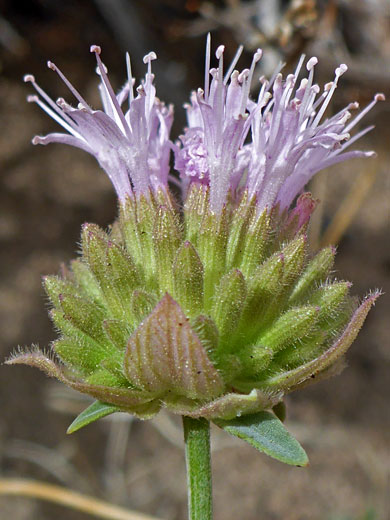 Monardella linoides is mainly found in the southern Sierra Nevada and other ranges in south California, together with small areas of Arizona and Nevada. It grows over a range of elevations and habitats resulting in varied characteristics, and five subspecies have been identified, differing in such aspects as leaf and bract width, bract shape and peduncle length.

Plants produce several stems, branching from the base; they are evenly covered by short, recurved hairs, not spreading. The narrow leaves are in opposite pairs, quite well-separated from adjacent nodes. The inflorescence is a tight cluster, one or more per stem, containing several dozen flowers, of which only a few are in bloom together. The five-lobed calyces have a covering of short, stiff, spreading hairs, while the pink to purple corollas are also hairy on the outside; they have a two-lobed upper lip and a three-lobed lower lip. The stamens are exserted. Flower clusters are subtended by thin, ovate, prominently-veined bracts, green to pinkish or light brown, hairy along the margins and upper surfaces, and up to one inch in length. 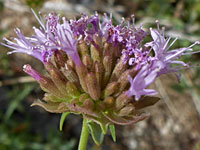 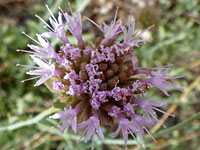