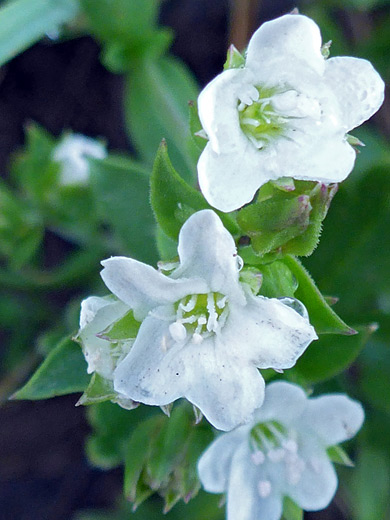 Flowers of moehringia macrophylla are produced singly or in spikes of up to five (most often in pairs), on stalks around half an inch long, angled upwards. They are formed of five unfused, ovate, green sepals, which have pointed tips and keeled midribs, and five white petals, somewhat longer. Sepal margins are lighter colored, or whitish. Petal tips are rounded and not notched, unlike those of some similar silene species. The petals surround ten white stamens and three white styles. Fruits are rounded black capsules, with six little teeth at the top.

Plants produce one stem or several, sparingly branched. Some stems are sterile; non-flowering. Stems are ridged, somewhat angular in cross-section, and densely covered by short, spreading hairs. Leaves have a faint midvein, and sometimes a pair of side veins. Leaf edges are minutely ciliate, especially the lower portion. Leaf tips are pointed. 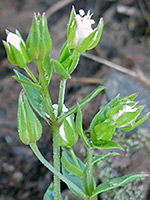 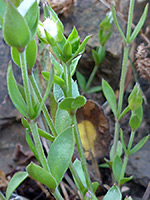 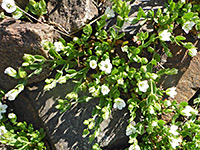