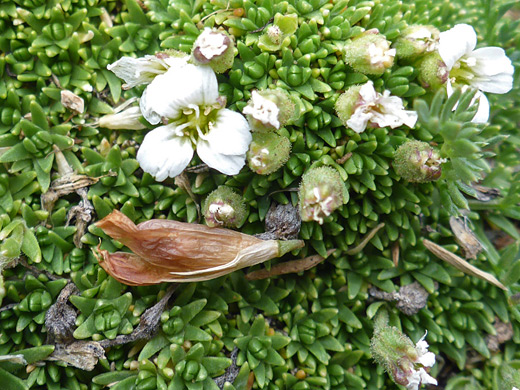 Minuartia obtusiloba is a low-growing, mat-forming species, in most of the West found at high elevations above the treeline, though its range extends into Canada and Alaska, where it can be found over a wider elevation range, including around sea level.

Stems are short, running along the ground, and bear many small, closely-spaced leaves, which are triangular in cross-section, with a prominent midrib and three lengthwise veins (most visible on the undersurfaces). Leaves are hairless and somewhat shiny.

Flowers are large in relation to the leaves. They grow on glandular stalks around half an inch long, and are formed of a cup-shaped hypanthium surrounded by five green, glandular, blunt-tipped sepals which have three veins towards the base. Sepal tips curve inwards slightly. The five petals are mostly white, green at the base, spatulate to ovate in shape, and about twice as long as the sepals - up to half an inch. At the center are ten stamens and three styles.