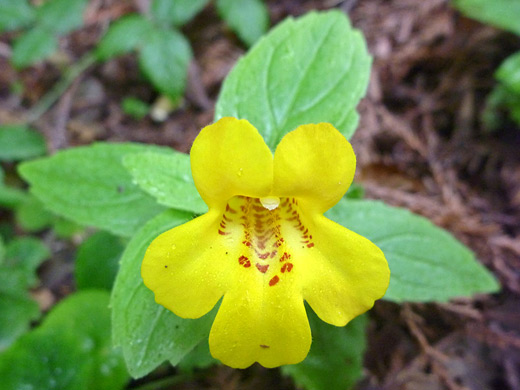 Mimulus dentatus inhabits quite a specific habitat; wooded streambanks near the Pacific coast, from Humboldt County in north California, northwards to the Canadian border. Stems are fairly short, around one foot, and have a covering of short hairs, as do the relatively large, oval leaves, which are lined by a few regular, well-separated teeth, and are crossed by (usually) five veins - a midvein and two pairs of side veins, pinnately joined. Stems grow generally upright.

Flowers are attached by a stalk of up to two inches. The calyx is generally hairless, and divided into five equally sized lobes. The yellow corolla opens to five lobes, two at the top, three below; all are approximately equal in shape. Lobe tips are usually shallowly notched. The lower portion of the corolla is marked by several lines of red spots, two running along the folds that lead to the lobe divisions. The tubular part of the corolla is quite long, in the range 1 to 1.5 inches.