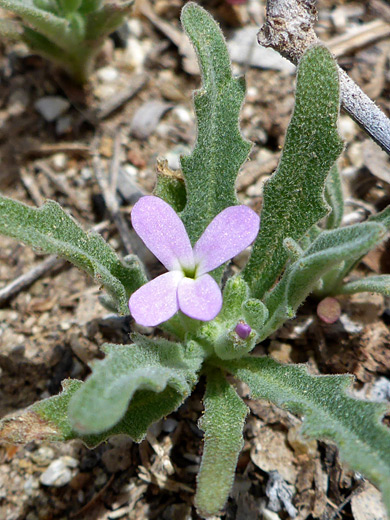 Matthiola parviflora, a Mediterranean species, has recently become established in and around Tucson, central Arizona. Flowers are pale pink to almost white in color, about half an inch in diameter, formed of four narrow, obovate petals that have straight margins and tend to be slightly displaced from the usual, regular cross-shape of the brassicaceae family. Flowers form singly or in small clusters, at the end of short stems, often less high than the leaves.

Leaves grow at the base and at alternate intervals along the stem; both surfaces have a covering of branched, woolly hairs, while the edges are usually lined by lobes, or coarse teeth. Basal leaves are stalked, while those along the stem are sessile. Stems are erect, and branched from the base. Fruits are slender pods, with two spreading horns at the tip. 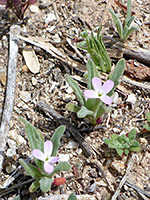