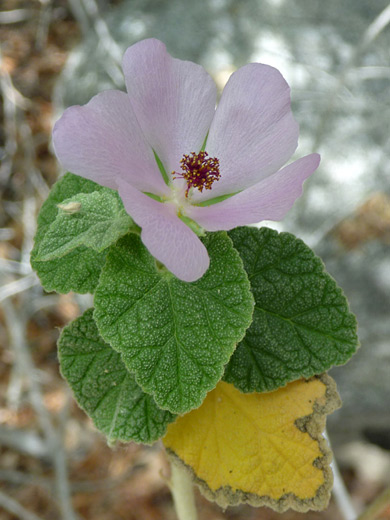 As its common name (bush mallow) suggests, malacothamnus densiflorus is large-growing species; a shrub up to six feet tall, producing many overlapping, spreading, yellow-brown branches. The plant has limited distribution in south California, in the mountains at the west edge of the Sonoran Desert, extending to the Peninsula Ranges bordering San Diego. Leaves are quite thick, have branched veins and a covering of tiny, star-shaped hairs, in common with many other members of the malvaceae family. Those lower down the stems are gently lobed, while those higher up are generally unlobed.

The inflorescence forms at the top of the stems; a compact cluster of densely-packed, stalkless flowers, in which the five pale pink/purple petals are rather longer than the green, bristly, five lobed calyx underneath. Petals are generally not overlapping, and are clawed, narrow at the base. At the center is a fused column of filaments and a style, topped by a spherical cluster of reddish stigmas and anthers. 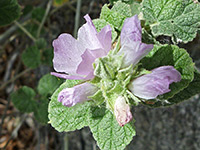 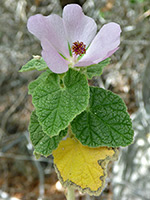