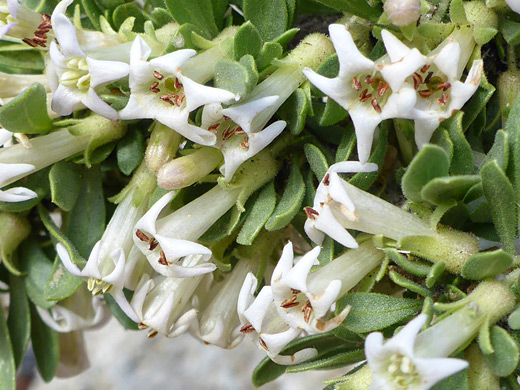 Green leaves and white flowers; lycium cooperi, Alabama Hills, California
Lycium cooperi is a small to medium-sized shrub with many rigid, woody, leafy branches, armed with thorns. Young branches have a covering of short hairs, sometimes glandular. Leaves are clustered, quite thick, and similarly hairy. The greenish-white flowers are produced in large numbers from the upper leaf nodes; one to several per cluster.

Flowers have a narrow, bell-shaped calyx, opening to five (less often four) triangular lobes, recurved when mature. The corolla also has five (or four) lobes, and is lightly hairy on the outside. Five stamens are slightly exserted , attached about half way down the corolla tube. Anthers are initially pale green, maturing to brown. The corolla is around 0.7 inches in length, about twice as long as the calyx. Fruits are two-chambered berries. 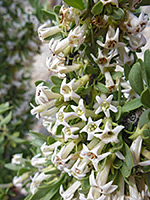