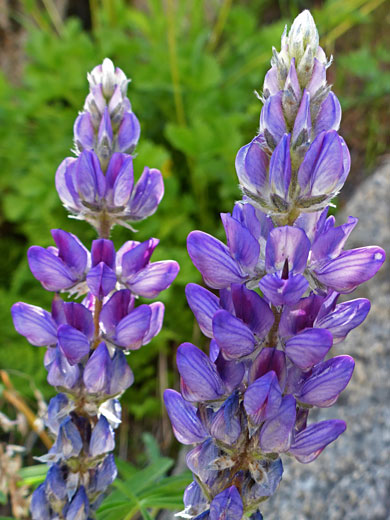 Lupinus pratensis is found mainly in the southern Sierra Nevada, plus a few isolated areas to the east. Leaves grow at the base and along the stem, and they have a sparse covering of very short hairs. Leaflets are relatively long and narrow, while leaf stalks are also long, up to 10 inches for those near the base. Stems are more obviously hairy, especially towards the top.

Flowers are arranged in closely-spaced whorls, and are subtended by leafy bracts. The calyx is divided into two unlobed lips, strigose-hairy, while the rear of the banner petal may also be hairy (var eriostachyus) though is usually not (the more widespread var pratensis). Flowers are variously blue, purple or yellowish, with the darkest colors found at the center of the banner petal and the tip of the keel. The banner petal has a prominent groove down the middle, while the side margins are bent backwards. 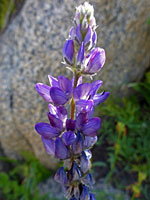 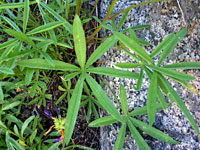