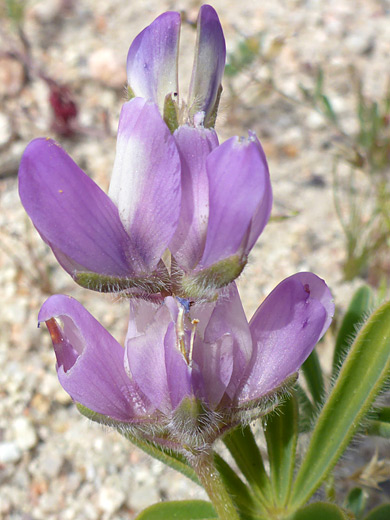 The inflorescence of lupinus microcarpus is produced at the top of a leafless stalk of up to 12 inches; a compact or elongated cluster of whorled flowers, with petals usually colored pink to purple, less often white to dark yellow. Flowers are up to 0.8 inches long, and each is subtended by a recurved bract about half this length. The bracts and the two-lipped calyx are covered by long, shaggy, white hairs. Pods are ovate in shape, about half an inch long and almost as wide, and also densely hairy; they contain two seeds.

Leaves grow on stalks of up to 6 inches; around three times as long as the leaflets, which are silky-hairy underneath but hairless on top, and often folded up along the midvein; there are typically nine leaflets. Stems are hollow.

Var horizontalis has broad, elliptic wing petals, while var densiflorus and var microcarpus have linear or narrowly oblanceolate wing petals; the former tends to have appressed hairs on the bracts, and fruits angled outwards, while the latter (the most widespread variety) has more shaggy bract hairs, and fruits angled upwards. 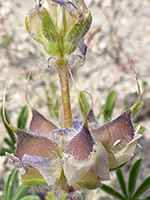 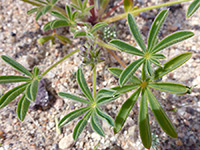 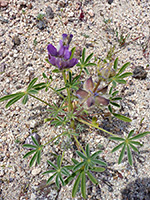