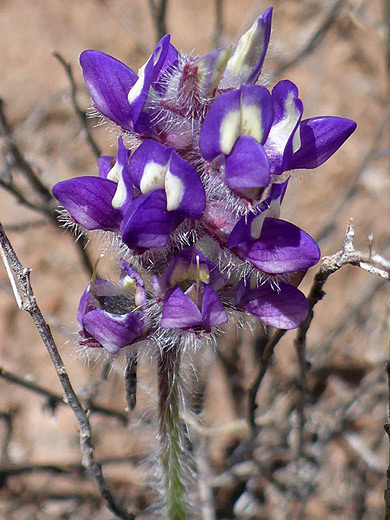 Lupinus brevicaulis is a low-growing species found in sandy areas across most of the Southwest. All parts of the plant are small, and the stems rise just a few inches above the ground. Leaves are concentrated around the base; they are divided into short but relatively broad leaflets, narrow at the base, wider and rounded at the tip. Upper leaflet surfaces are hairless, but the undersides are covered by long white hairs, as are the stems. Stems and leaflet margins may be slightly purple.

The inflorescence is a compact, spiralled cluster occupying about one inch at the top of the stem, typically containing around a dozen flowerheads. The purple, two-lipped calyces are also hairy. Flowers are purple-blue in color, with a white or pale yellow patch at the center of the banner petal. The keel petals are hairless. The fruit is a hairy, ovate pod less than half an inch long, containing one or two seeds. 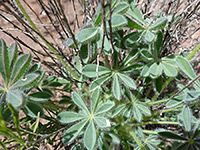