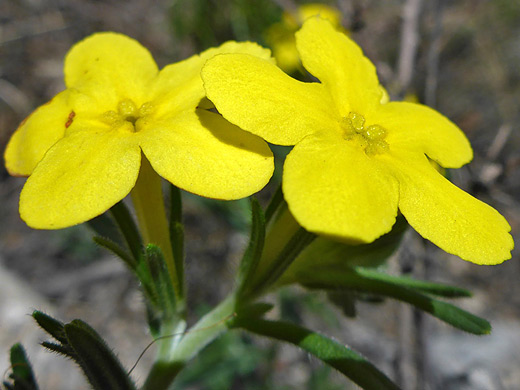 Lithospermum parksii is found near the Guadalupe Mountains in Eddy county, south New Mexico, and scattered locations in west Texas. Leaves are linear in outline, colored dark green, with a prominent center vein and an even covering of short hairs. They grow all along the stems, and those at the top are similar in length to those near the base.

The inflorescence is a small cluster of flowers at the tip of the stem. Flowers are formed of a five-lobed calyx, divided almost to the base, and a thin, tubular, yellow corolla that opens to five broad, rounded lobes, held at 90 degrees to the tube. The lobes are shorter than the tube. At the base of each lobe is a small, egg-shaped appendage, together forming a ring around the narrow corolla throat, which conceals the stamens and style. 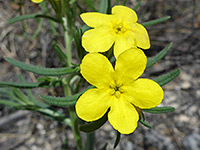