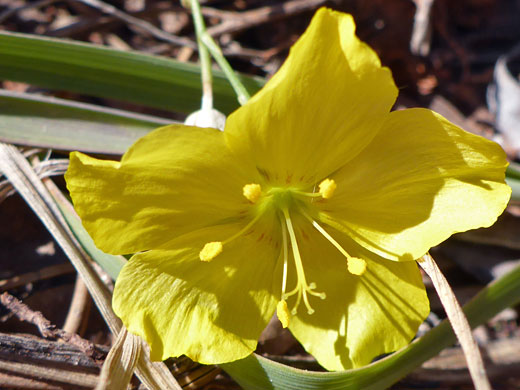 Linum subteres is a relatively uncommon species, found mainly in the southern half of Utah. Like many flaxes it is a delicate plant, with slender stems bearing small leaves, and topped by open clusters of a few, relatively large flowers.

The five sepals, persistent during flowering, are lanceolate in shape, fairly broad at the base, and their edges are lined with a few glandular teeth. Sepal tips are pointed but not bristle-tipped. The five petals are obovate, and evenly yellow in color, with a few orange marks at the base. At the center are five spreading, yellow stamens and five styles, which are fused for most of their length, and topped by a head-shaped stigma.

All plant parts are hairless. Leaves and stem are greyish-green (glaucous). Leaves are clustered at the base and at alternate (sometimes nearly opposite) intervals along the stem. Cauline leaves are held upwards, almost touching the stem, and they are smaller than those around the base. Leaves terminate in a tiny spike. 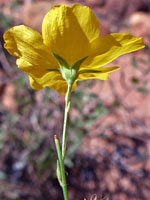 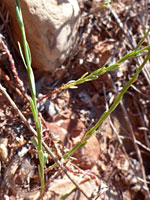 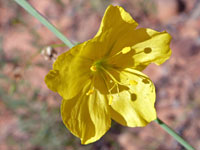