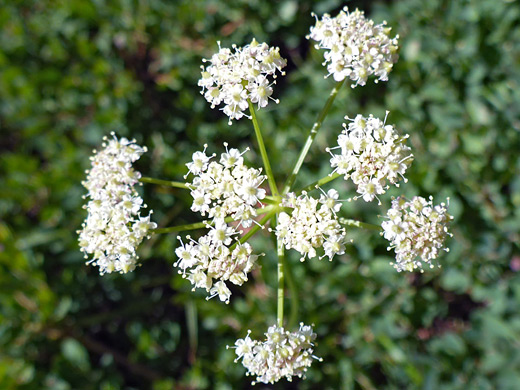 Ligusticum tenuifolium is one of the smaller, less noticeable members of this genus; usually less than 2 feet tall, and, at flowering time, often mostly or completely lacking leaves. The species is similar to ligusticum filicinum, and is sometimes considered a variety. Leaves are primarily basal, divided up to three times into narrow, linear leaflets - their length is more than three times the width. The basal leaves tend to wither before flowering, but one stem leaf may persist; shorter, and with fewer divisions. Leaves have a sheath at the base, often colored pink. Stems may branch a few times, or remain unbranched. Leaves and stem are hairless.

The inflorescence forms at the top of the stem, though there may be one or two smaller umbels lower down. There are no bracts or bractlets. The main umbel has between 5 and 13 rays, each around one inch long. Flowers have five small lobes and five protruding stamens, around a central light green ovary. 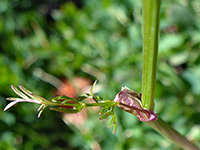 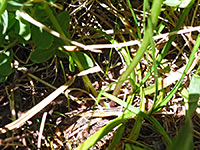 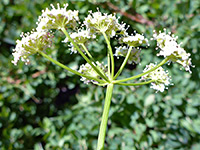