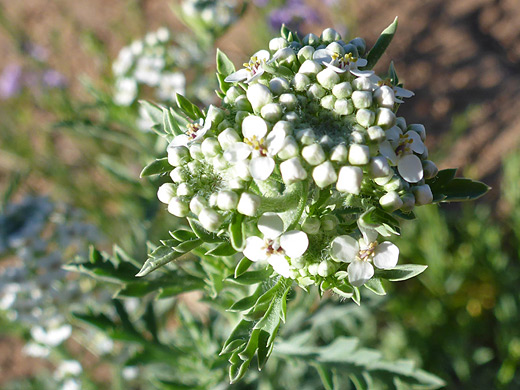 Lepidium thurberi, an annual species, is characterized by pinnately divided leaves, and terminal, spherical clusters of small white flowers. Leaves grow in a basal rosette and all along the stem, often right beneath the flower clusters. Stems and leaves are covered by bristly white hairs, which are variable in shape and length; some are short and wider at the base, others longer and equal in width all along. Plants produce one stem, which branches towards the top. Basal and lower stem leaves are divided into ovate or lanceolate leaflets, which have angular (toothed) edges. Upper stem leaves are still divided but the margins are usually entire.

The white petals and green sepals are generally round in shape. The flower center contains six stamens and one style. The inflorescence consists of a group of clusters, initially compact, becoming separate as the individual peduncles lengthen. 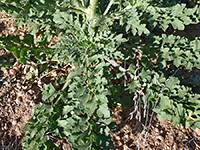