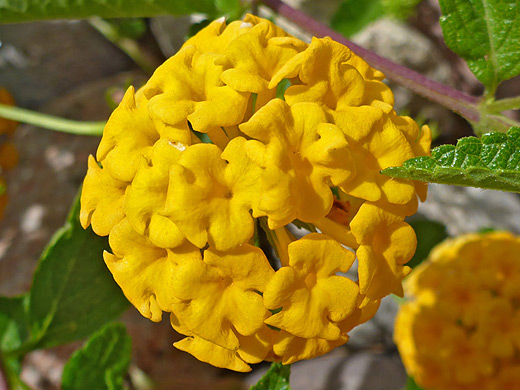 Lantana camara is an invasive species in the US, originating in South and Central America; it is vigorous and fast-growing, and also toxic to animals. Plants are shrubs, freely-branching, producing bright green leaves at the nodes and along the branches. The evergreen leaves are shiny and hairless on the upper surface, dull and lightly hairy below. They have large teeth along the edges and a prominent pattern of lighter-colored veins. The reddish-green stems are square in cross-section (most evident when young), and often covered by short, rough hairs.

Flower color ranges from yellow to pink to orange to red; generally darkening with age. Buds are green. Plants can be in bloom all year. Flowers form in spherical clusters at the ends of the branches; they have a narrow, tubular corolla, about half an inch long, that opens to four broad, partly fused lobes. 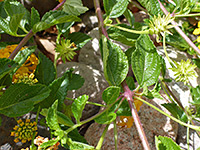 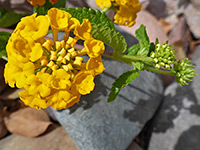