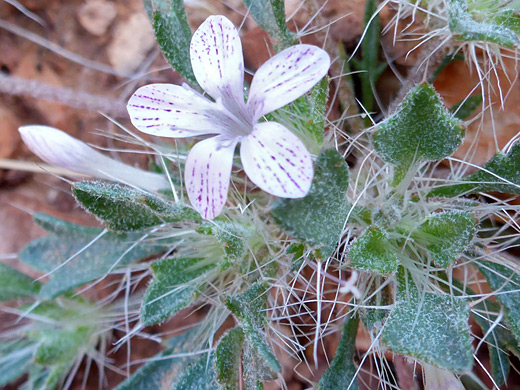 There are two subspecies of langloisia setosissima, with somewhat different flowers. The most widespread is ssp setosissima, for which the corolla is uniformly colored white to pale pink, crossed with lengthwise purple dots and lines, while for ssp punctata the flower center is dark purple and the corolla lobes have two yellow or orange patches in addition to the purple dots. Ssp punctata occurs more to the west of the region, and accounts for the disjunct populations in Idaho and Oregon.

Leaves grow along the stem, generally not at the base; they have a a terminal lobe, or tooth, and one or two pairs of lateral lobes, all tipped with a relatively long white spine. Leaf surfaces are covered by bristly, branched, non-glandular hairs. Flowers have a bristle-tipped calyx (0.2 inches long) of five equal lobes, and a funnel-shaped corolla with exserted stamens. Flowers are held slightly above the leaves. The corolla lobes are about twice as long as the corolla tube for ssp punctata, and a third as long for ssp setosissima. 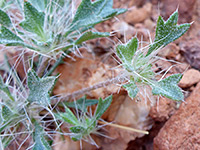 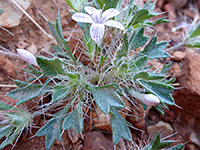 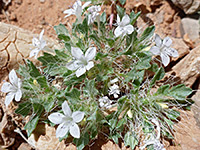