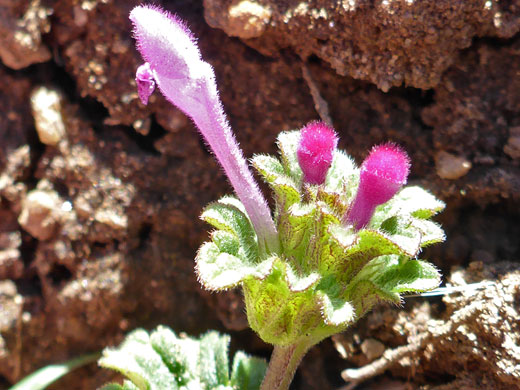 Lamium amplexicaule (henbit dead-nettle), Cuyamaca Rancho State Park, California
Native to Africa and Eurasia, lamium amplexicaule is found is scattered areas of all the western states; it is most common in urban areas, and most widespread in California, including the Central Valley, the Bay Area and the Los Angeles Basin.

Leaves are as long as they are wide; they have an even covering of thick, white, non-glandular hairs, and are lined by a few large, rounded teeth. Leaf bases are rounded. Flowers are clustered at the top of the stem, subtended by leafy bracts. Flowers are formed of a short calyx, divided into five equal-sized lobes, and a longer (up to 0.8 inches), narrowly tubular corolla, pink to reddish purple. The corolla has a hooded upper lip and a three-lobed lower lip, this whitish with a few pink spots. The side lobes are small; the middle lobe much larger, and notched at the tip. Included within the upper lip are four stamens and a two-lobed style. 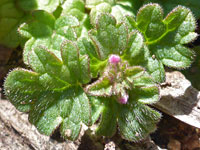 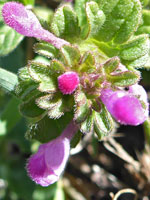 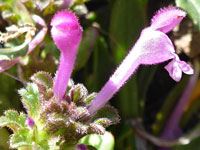