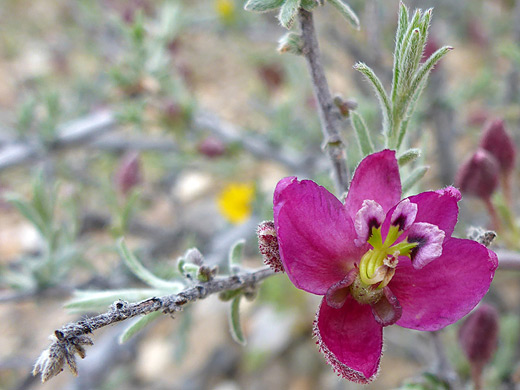 Stems of krameria erecta, a shrub, are hairy, woody, blunt-tipped and much branched. Leaves are small and inconspicuous, approximately linear in shape, produced in clusters at relatively widely-spaced intervals.

Flowers though are large and colorful, over one inch in diameter; they have five cupped, purple sepals, lighter on the upper surface, covered with white hairs underneath, and five smaller petals. Sepals are spreading to ascending, unlike the similar krameria bicolor which has reflexed sepals. Three upper petals (the flag petals) are pink or light purple around the edge, briefly dark purple lower down then light green at the (clawed) base, while the lower two (the glandular petals) are uniformly darker, and thicker, positioned either side of the ovary, from which extends a recurved style. The flag petals are fused at the base. The outer margins of the glandular petals are irregularly flecked with dark blisters. The flower center also contains four curved, green stamens. 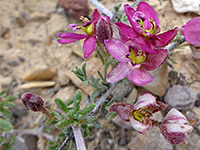 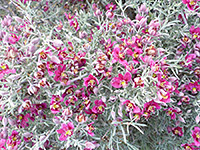 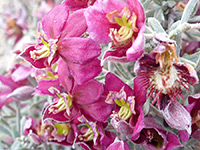