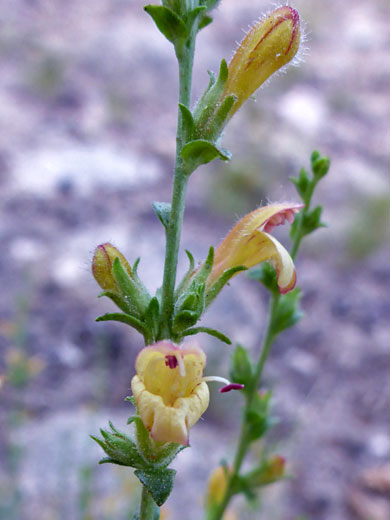 Keckiella rothrockii is most widespread across the southern half of the Sierra Nevada, and is also found in some adjacent mountain ranges, both in California and Nevada. Stems are green, unbranched, and moderately to densely covered by short hairs. Leaves are in opposite [pairs, or sometimes whorls of three; they may have a few tiny teeth towards the tip but are otherwise entire.

Flowers are produced in a narrow, unbranched spike, and are sessile, lacking pedicels. The green calyx is divided almost to the base into lanceolate lobes, often strongly recurved at the tip, while the corolla, around three times as long (up to 0.7 inches) is variously colored brown to yellow or reddish/purple; it has a projecting upper lip and recurved lower lip. The outer surface of the corolla is covered by longer, spreading hairs. The four stamens have white filaments and purple anthers. The infertile stamen at the floor of the corolla is hairless near the tip, hairy below.

Two varieties are var jacintensis, restricted to the San Jacinto Mountains, characterized by hairless leaves and slightly smaller corollas, and the more widespread var rothrockii, for which the leaves have a dense covering of short, whitish hairs. 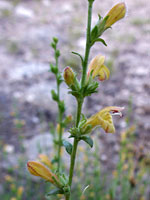 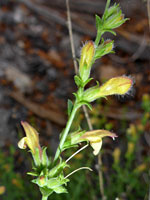