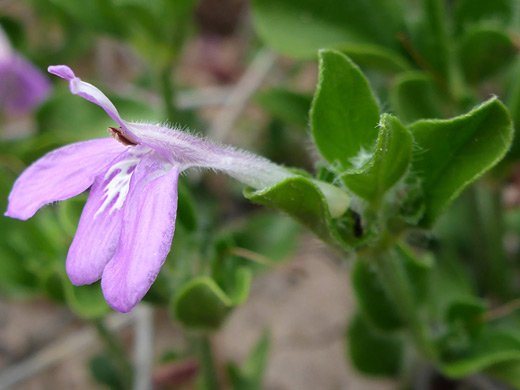 Four-lobed corolla of justicia pilosella, Dome Trail, Big Bend Ranch State Park, Texas
Stems of justicia pilosella may grow upwards, reaching heights of around one foot, or stay close to the ground. Stem bases are woody. Leaves grow at opposite intervals along the stems, and right beneath the flowers, which are produced at the stem tips. Leaves are relatively thick, generally hairless on the faces, but lined by quite long white hairs along the edges.

Flowers generally lack pedicels; they are formed of a tubular corolla, which is whitish at the base, becoming pink or purple higher up, and opens to four lobes; three angled downwards, bent back by around 90 degrees, and one upwards, much less angled. The middle of the lower lobes is marked with white lines or blotches. The flower center contains two stamens. The corolla is supported by a short, green, four lobed calyx, underneath which are several leafy bracts. The outside of the corolla tube is evenly hairy. The corolla is about one inch in length. 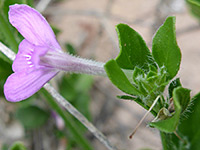 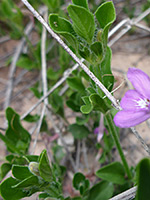