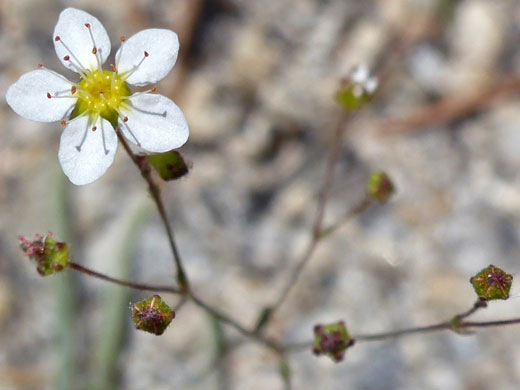 Ivesia santolinoides is found all along the Sierra Nevada, and some of the higher mountains of southern California. It is rather different to most other ivesia species, easily recognized on account of the long-hairy basal leaves with densely-clustered leaflets, and open clusters of white flowers. Basal leaves are divided into up to 160 leaflets, each of three to five lobes, all so closely-spaced as to be barely distinguishable. The one to three stem leaves are shorter than those at the base, but similar in appearance. Stems, and pedicels, have a sparse covering of glandular hairs.

The inflorescence can contain as many as 200 flowers, but several dozen is more typical. Flowers consist of a flattish disc, the hypanthium, below which are five ovate sepals, strongly recurved, alternating with five shorter epicalyx bracts. The five petals are white, clawed and yellowish at the base, and around twice as long as the sepals. 15 stamens project forwards; they have white filaments and purplish anthers which are wider than they are long. There is one pistil at the center. 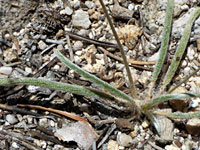 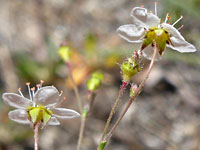 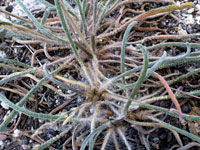