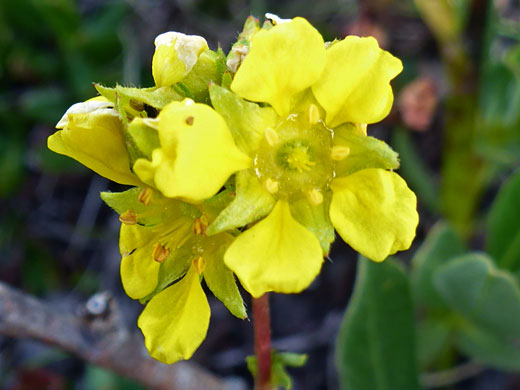 Ivesia lycopodioides is one of several species in this genus endemic to the Sierra Nevada and adjacent ranges to the east (the Inyo and White Mountains). Leaves are divided into tiny leaflets, each further divided into (usually) between four and eight lobes, ovate to nearly round. The lobes angle in all directions, giving the leaves a cylindrical appearance. Leaves are mainly basal; there are usually one or (less often) two stem leaves, less divided. Stems are held at various angles. Stems and leaf stalks are often red.

The inflorescence is a compact, head-shaped cluster, of up to 20 heads. Flowers are formed of five yellow petals, narrow at the base and broadening abruptly just above, and five shorter green sepals. There is one stamen at the base of each sepal, and a group of between five and 15 tiny pistils at the center. Flowers are around a third of an inch in diameter.

There are three varieties of ivesia lycopodioides (lycopodioides, megalopetala, scandularis), not always easy to distinguish; they differ in the size and shape of the leaflet lobes, the amount of hairiness of the leaves, and the presence or absence of a tiny spike at the lobe tips. 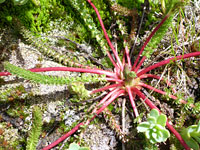 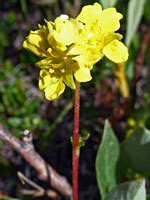