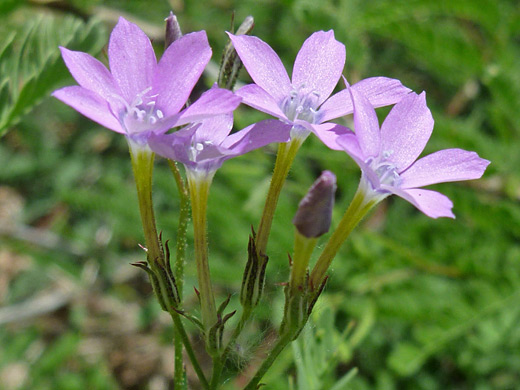 As its common name (dwarf gilia) suggests, ipomopsis pumila is a small plant, usually around 6 inches tall. It branches a few times from near the base, each branch about the same length as the main stem. Leaves and stems have a light covering of short, woolly hairs, often glandular. Leaves grow along the stems, at widely spaced, alternate intervals; they are pinnately lobed, usually divided into three, with the middle lobe much longer than the other two. Lobes terminate in a sharp point.

Flowers have a slender, funnel-shaped corolla opening to five spreading petals, and supported by a lightly hairy, five-pronged calyx about a quarter of an inch long. Petals are light purple, pink or nearly white, often with a thin bluish band across the base, while the inside of the corolla tube is light green-yellow. The corolla is 2 or 3 times as long as the calyx. Petal tips are pointed. Five white stamens project slightly beyond the petals, topped by pale blue anthers, and fixed at the throat of the corolla, between the petals. 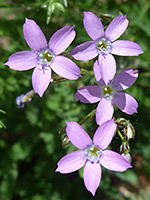 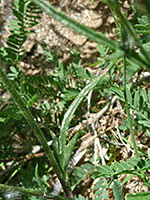