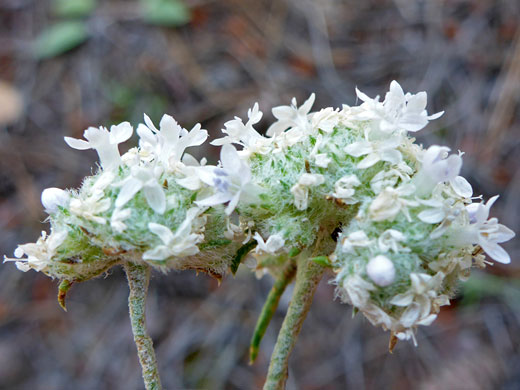 Ipomopsis congesta is found over a large area of the West, from northeast California and southeast Oregon, across the Great Basin and the Rocky Mountains to the northern Great Plains. The compact, head-shaped inflorescence of relatively small flowers makes this an easily identifiable species - most other members of this genus have longer, narrower flowers, in more open clusters.

Plants are perennials, producing several short stems that usually have a dense covering of woolly hairs but can sometimes be nearly hairless. Leaves are short and linear, usually but not always divided into several lobes. Flowers are formed of a hairy green calyx, and a corolla, about twice as long, with a pale yellow tube and five whitish, oblong lobes. The five stamens, which are all attached at the same level, are slightly exserted, and have white filaments and blue anthers.

There are seven subspecies of ipomopsis congesta, differing in aspects such as stem habit (erect vs. sprawling), relative length of the pistil, and the type of leaf divisions. Most are relatively widespread. 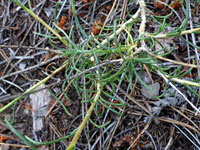