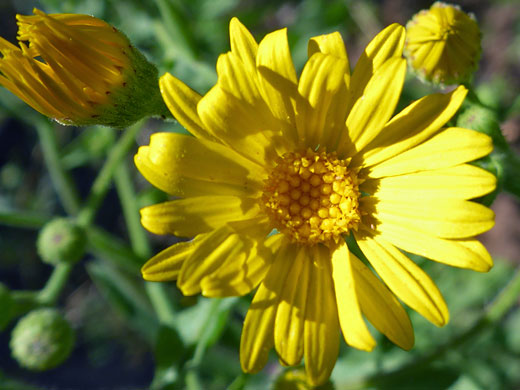 In the western states, heterotheca subaxillaris is most widespread in Arizona, in the center and southeast, with smaller occurrences in California and New Mexico. This is a weed-like species, often found on disturbed or waste ground, and sometimes forming large colonies.

Plants produce one to four stems, up to six feet tall, stout and covered by long, spreading hairs and short glandular hairs. The alternate leaves often have wavy margins, and may be lined with a few coarse teeth. Leaf bases are clasping. Leaves become narrower up the stem, while basal leaves are usually withered by flowering.

Stems are topped by branched clusters of all-yellow flowerheads, sometimes over 100; each has between 15 to 35 ray florets and 25 to 60 disc florets. Phyllaries are in several series; they are narrowly lanceolate in shape, pointed and sometimes red at the tip, and covered by short, glandular hairs.

There are two varieties of heterotheca subaxillaris; var subaxillaris of coastal regions of the south and southeast, and var latifolia of other areas, characterised, respectively, by presence or absence of tufts of coarse hairs at the tips of the outer phyllaries. 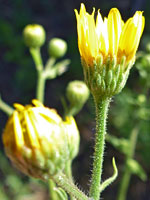 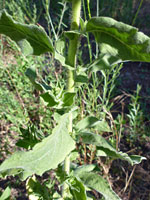