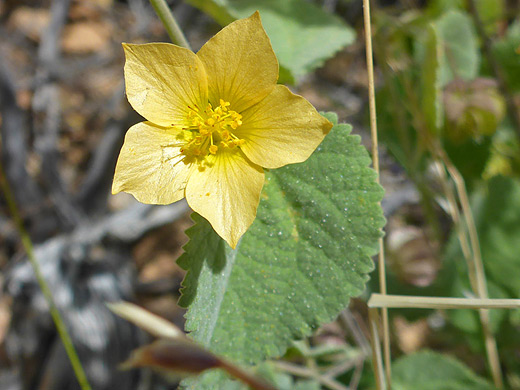 Herissantia crispa, the only US species of this genus, is found in the southernmost parts of California, New Mexico, Texas and Florida, and more extensively in Arizona. Stems and leaves have an even covering of whitish hairs, a mixture of simple and star-shaped. Stems are ascending or trailing. Leaves grow on stalks at alternate intervals, and are lined by large, rounded teeth. Leaf bases are cordate, the tips pointed.

Flowers are produced singly from the leaf axils, borne on a slender stalk up to 1.5 inches long, with a distinct downwards bend near the tip. Flowers have a disc-shaped calyx with five lanceolate lobes and five obovate, pale yellow petals, a little less than half an inch long. Petals are slightly overlapping along their lower edges. The flower center contains a cluster of several dozen yellow stamens, the base of their filaments fused to the style. 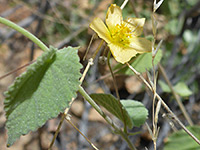 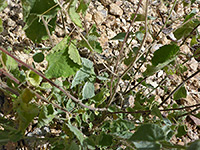