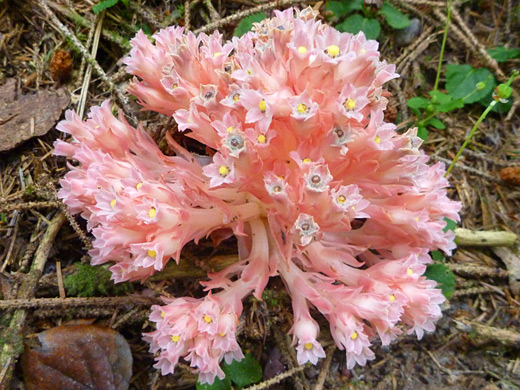 Hemitomes congestum - the only species in a monotypic genus - is an uncommon plant with an unusual appearance. It grows in shady, wooded terrain in the three Pacific states, from redwood forests near sea level to mountainous locations over 8,000 feet. The plant has no stem and no leaves, and lacks chlorophyll; the only visible growth is the inflorescence, a dense, branched cluster of small pink or cream-colored flowers, emerging in summer from an underground rhizome. The thick, fleshy flower stalks bear small, pink bracts, less than an inch long, with fringed margins.

Flowers are formed of two (sometimes four) sepals, four or five petals, eight small, dark-tipped stamens and a larger yellow (ageing to brown) stigma, which has a row of thick, whitish hairs underneath. The inner surfaces of the petals are densely covered by short hairs. 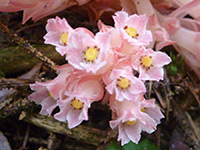