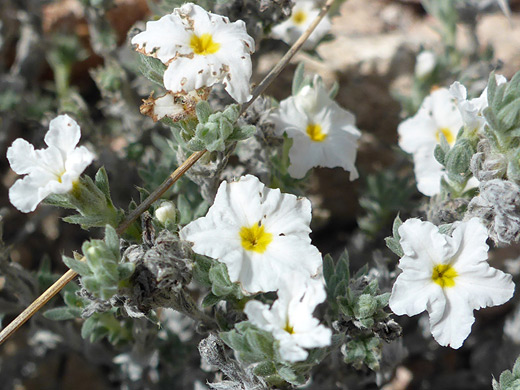 Heliotropium confertifolium is an uncommon species, found in scattered south Texas locations close to the Rio Grande, most widely in and around Big Bend National Park. Plants are low-growing perennials, with woody, branched stems bearing small but relatively thick leaves at alternate, closely-spaced intervals. Leaves and stems are covered with silky hairs, most lying against the surface, some pointing outwards.

Flowers are produced singly from the upper leaf nodes. The corolla is pure white apart from the center which is bright yellow. The corolla opens to five shallow lobes, which have somewhat irregular edges. The stamens and style are largely hidden within the narrow corolla tube. The fruit is a smooth, four-lobed cluster of nutlets, which separate when dry. 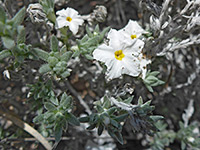