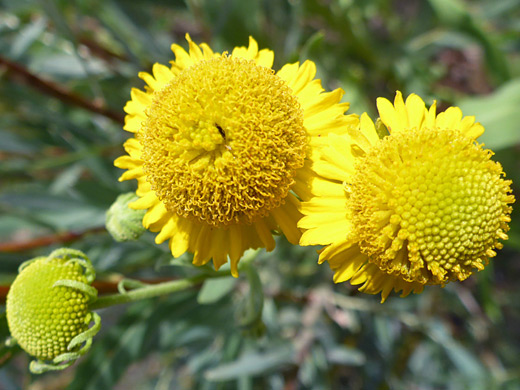 Helenium autumnale is a conspicuous plant when in bloom; tall, leafy stems are topped by up to 100 yellow flowerheads, two inches or more in diameter. The domed flowerheads are formed of between 200 and 400 (sometimes more) narrow yellow (less often red), five-lobed disc florets surrounded by a ring of between 8 and 21 pistillate ray florets, initially short but lengthening when mature to nearly one inch. Rays are often angled downwards, below the plane. The ray florets are widest towards the tip, and are divided into three rounded lobes. Phyllaries are green, linear and relatively long, initially partly enclosing the developing flowerhead.

Plants usually produce just one stem, but sometimes more, branching along the upper half. Stems are strongly winged, and have a covering of short hairs, most densely towards the base. Leaves are mostly cauline; those at the base are withered by flowering time. Upper stem leaves are sessile while those lower down may have short, winged stalks. 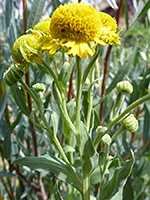 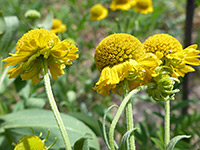 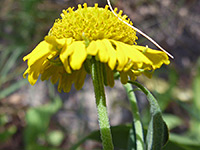