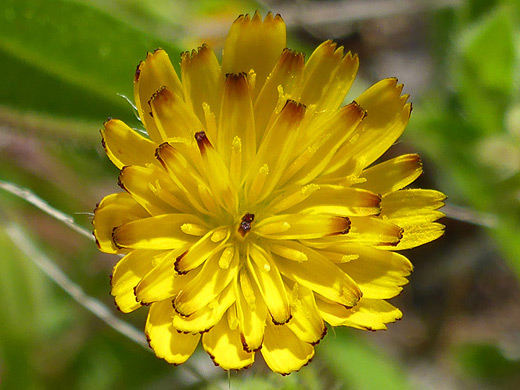 Hedypnois cretica along Lower Fish Creek, Superstition Mountains, Arizona
Hedypnois cretica resembles many other dandelion-like species; one distinguishing feature is that the otherwise all-yellow ligulate florets are often reddish brown at the tip. Plants are most widespread in California; along the coast, across the adjacent mountains, in the Central Valley and the southern deserts, but are also found in some low elevation regions of Arizona, New Mexico and Texas. The species is naturalized, originating in Europe and Asia.

Stems, leaves and (usually) phyllaries have a covering of bristly white hairs, irregular in appearance, and split at the very apex. Leaves grow mostly at the base, pointing upwards, and are around half the height of the stems, which are topped by one or several flowerheads. These have two rows of linear green phyllaries; those in the lower row are much shorter than those in the upper row, which are darker at the tip, and curve outwards beneath the florets, which number between 8 and 30. Florets are notched (lobed) at the tip. 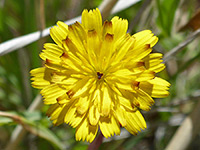 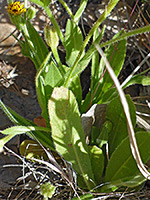 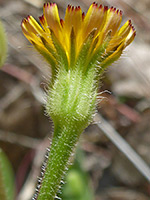