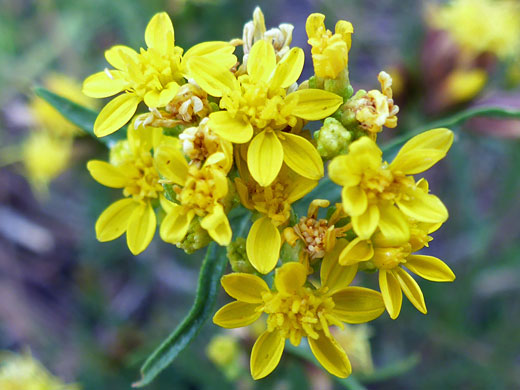 Gutierrezia sarothrae (broom snakeweed), Fairyland Canyon Trail, Bryce Canyon National Park, Utah
Gutierrezia sarothrae, a subshrub, produces a large cluster of branched stems up to 3 feet tall, bearing narrow, closely-spaced leaves, which at blooming time persist only along the upper half of the stem. Leaves have a central vein, and usually, a pair of parallel side veins. Leaves tend to be angled upwards, held close to the stem. Stems are brownish, becoming woody, at the base, and green above.

Flowerheads are produced as a dense, flat-topped cluster (of up to 14); they contain between three (less often two) and eight ovate yellow ray florets and from three to nine yellow disc florets. The small green phyllaries are in two or three series, numbering up to 21. When in bloom, the multiple clusters tend to merge, giving the whole plant a yellow, domed appearance. 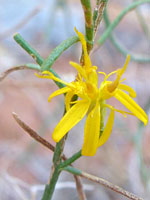