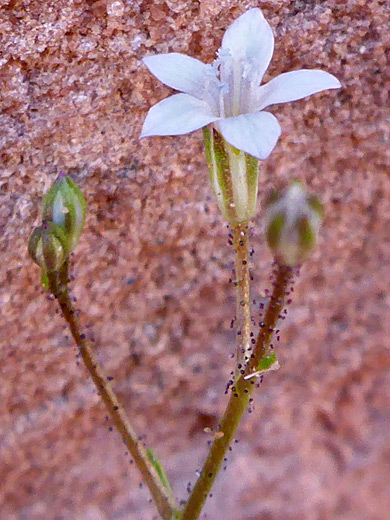 The leaves are the most distinctive aspect of gilia transmontana; they are pinnately lobed, like many other gilia species, but the lobes are rather larger and more widely separated. The lobes may have one or more large teeth along the edges. Leaves have a sparse to dense covering of woolly hairs, especially on the midvein. Leaves grow at the base and along the stem, and all are similar in size. The branched, reddish stems are woolly hairy below, becoming sparsely glandular above, the glands colored purple. Branches angle outwards or upwards.

Flowers are produced in a small, open cluster, and are attached by unequal-length pedicels. The calyx may be hairless or glandular; it has five green lobes, pointed at the tip, separated by white membranes, similar in width. The corolla is about twice as long as the calyx (up to 0.3 inches); the tube is reddish, hidden by the calyx lobes, while the throat is yellow becoming white above, and the lobes are white to pale pink. The style and stamens are slightly exserted above the lobes. 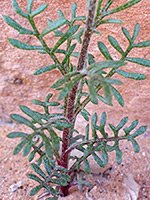 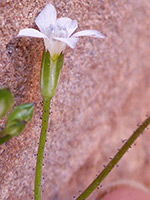 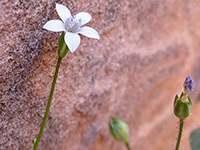