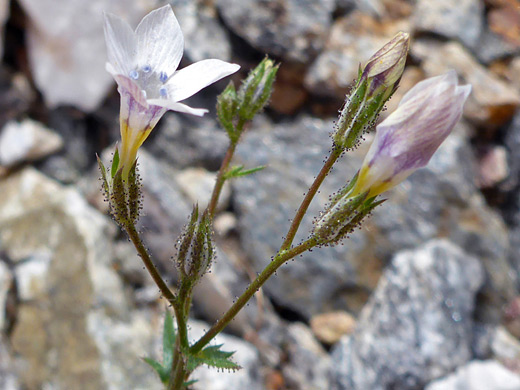 The main identifying characteristic of gilia stellata is the pubescence; the stem and lower leaves are densely covered with white hairs, which are bent at a sharp angle, and vary in length. The upper stems, the pedicels and the calyces have a sparse covering of glandular hairs, which have translucent stalks and black glands. Plants usually branch a few times, from the base. Leaves grow in a rosette near the base, and at wide intervals along the lower part of the stem; they are divided into irregular lobes, themselves often lobed, or toothed.

Flowers form in an open cluster, typically of between four and eight heads, attached by unequal-length pedicels. The calyx has five pointed lobes, separated by white membranes of similar width. The funnel-shaped, relatively broad corolla is about twice as long as the calyx, up to 0.4 inches. The corolla tube is yellow, and is mostly contained within the calyx, while the throat is also yellow, with faint purple veins or spots, and the lobes are white to pale pink. The style and the blue-tipped stamens rise to about the same height or the lobes, or slightly higher. 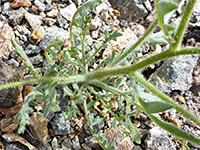 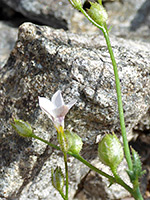