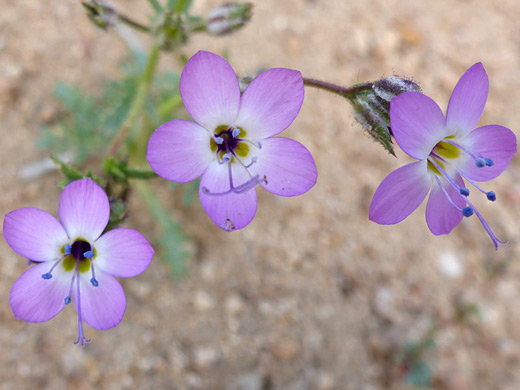 Leaves of gilia brecciarum grow in a rosette-like cluster at the base, and at widely-spaced intervals along the stem, which is typically around 12 inches tall. Stems branch a few times, the branches held at varying angles. Stems have a covering of tufted, woolly hairs, especially towards the base. Leaves are divided into up to ten pairs of irregularly-shaped lobes, themselves divided; segments are reddish, and pointed, at the tip. Basal leaves tend to angle upwards at around 45 degrees. Cauline leaves are just once-pinnate, while those near the top of the stem are more shallowly lobed.

Flowers are produced in small cluster at the top of the stem. The pedicels and the calyces have a covering of fine, black, glandular hairs. The purplish calyx lobes are wider than the light-colored membranes in between. The corolla is up to 0.8 inches in length, about three times as long as the calyx. The tube is purple, the throat yellow and white, and the lobes lavender-purple, withering to blue. The stamens are exserted.

Two subspecies are ssp brecciarum and ssp neglecta; comparing the two, the former has a shorter corolla, an included rather than exserted corolla tube, more yellow coloration on the throat, and stamens less exserted, if at all. 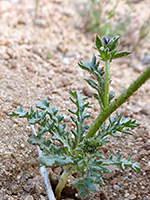 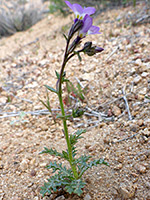