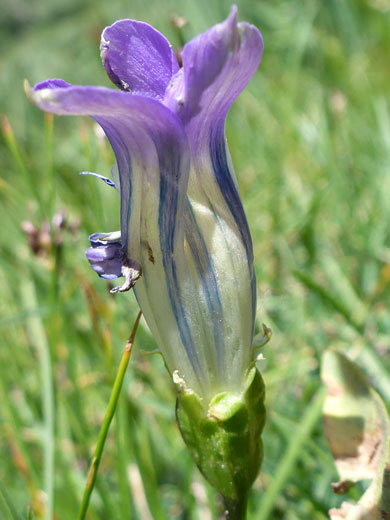 As its common name indicates, gentianopsis holopetala occurs mainly in the Sierra Nevada, with other populations in some adjacent areas of California, and far west Nevada. Leaves are found mainly at the base and the lowest few inches of the stem, where they are generally spatulate, with rounded tips; mid to upper stem leaves are few in number, narrower, and more pointed. Stems may angle upwards or grow along the ground.

Flowers are usually solitary, at the top of relatively long stalks, up to 8 inches. The calyx is light green, hairless, up to one inch in length, divided about half way into four narrow lobes, while the corolla is almost twice as long, approximately cylindrical in shape, with four lobes whose margins are entire or only slightly irregular, not noticeably fringed. Corolla lobes are purple, while the tube is whitish, streaked with blue. 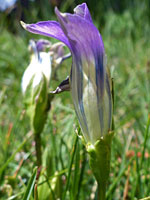