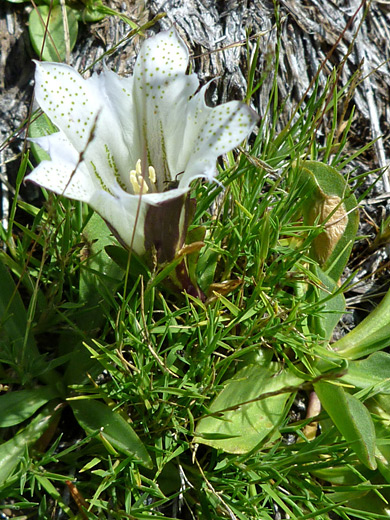 Gentiana newberryi is a low-growing, relatively uncommon species found in wet meadows at medium to high elevations. Stems grow sideways, emerging from underneath the basal leaf rosette, then turn up at the end, supporting (usually) a single flower; less often two to five. In the highest elevations the stem can be almost absent, just a quarter of an inch or so. Leaves grow mostly at the base, where they are oblanceolate in shape, varying in length from less than half an inch to more than two inches; the stems may also have a few leaves, generally narrower and more linear.

The relatively large flower has a bell-shaped, white to pale blue corolla with five lobes at the top, between which are five smaller appendages, divided into two triangular segments, each tapering to a narrow tip. The inside of the corolla tube is often marked by greenish bands, while the lobes are specked with green dots.

There are two varieties: var tiogana (found at higher elevations) has a white corolla, with purplish stripes down the outside, from the tips of the lobes, while var newberryi has a bluish corolla, lacking stripes.