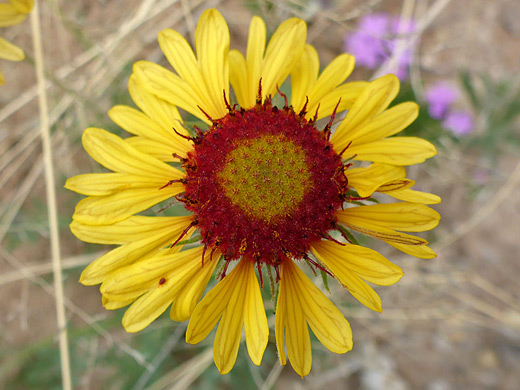 Leaves of gaillardia pinnatifida grow around the base and the lower half of the stem, and most have pinnatifid margins; divided, but not all the way to the midvein. Margins of the upper stem leaves are more likely to be toothed or entire. Plants towards the west of the range, especially in Arizona, tend to have narrower, unlobed leaves. Leaf surfaces are slightly to densely hairy, and the hairs range in character from short and bristly to long and soft.

Stems are topped by a single flowerhead, beneath which are 20 to 30 phyllaries, also with bristly or soft hairs. Heads have between 5 and 14 yellow ray florets (occasionally these are absent), and from 30 to over 100 disc florets, which are initially yellowish, soon becoming red-purple. Rays are partly divided at the tip into three lobes, and they are crossed by prominent, darker veins. Rays may become reddish around the tip and/or underneath. 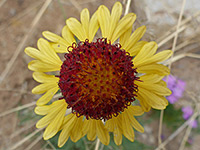 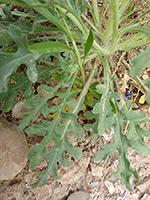