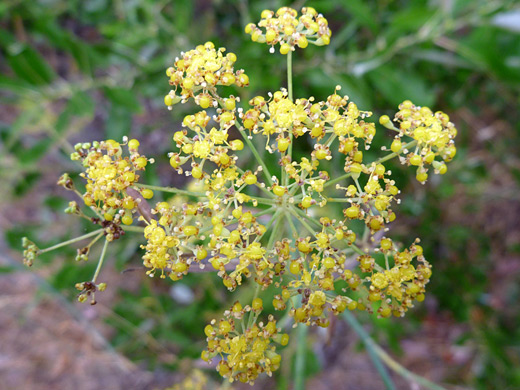 Foeniculum vulgare is an imported species, originating in Europe. The plant (especially the fruit and leaves) has a long history of use, in medicine and cooking. Plants produce many upright, branched stems, up to six feet tall, with distinctive feathery leaves along the lower half; they are pinnately divided three or four times into threadlike lobes. Stems are hollow but rigid, hairless, and grey-green in color (glaucous).

The inflorescence is a compound umbel, lacking both bracts and bractlets, and containing between 15 and 40 rays which are unequal in length, varying between about 0.5 and 2 inches. Each ray holds between 18 and 25 flowers. Individual flowers have five yellow petals, often curved inwards, around a domed yellow pistil and five protruding yellow stamens. Fruits are ovate in shape, and ribbed; initially greyish green like the stems, becoming hard and brown as they dry out. 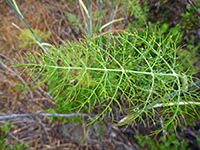 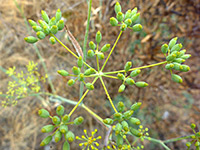