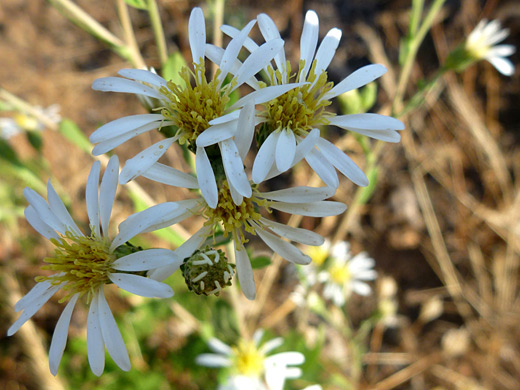 Eurybia radulina grows in generally dry environments; forests, hillsides and plains, from near sea level to over 5,000 feet. Stems grow upright, are green to light brown in color, and have a covering of soft, waxy hairs. The alternate leaves have a rough (scabrous) surface, and relatively large, somewhat irregular teeth along the edges.

Flowerheads are composed of nine to 15 white (occasionally pale purple), non-overlapping ray florets, about half an inch long, and a center of 30 to 70 yellow disc florets, which become brown or purplish as they mature. The bell-shaped involucre is lined by several rows of phyllaries; these are whitish around the base and dark green above, oblong in shape and pointed at the tip. The upper edge often has a purplish tint. The inflorescence is flat-topped cluster, containing five to over 30 heads. 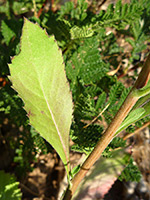 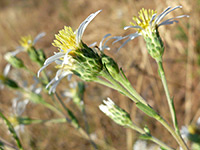