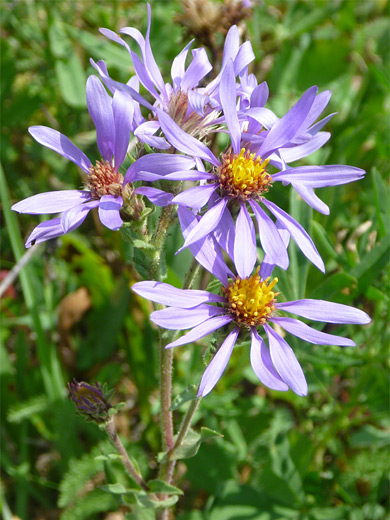 Stems of eurybia integrifolia branch sparingly to form small, narrow (not spreading) clusters of rather untidy-looking flowerheads composed of 10 to 20 lavender-purple ray florets and a center of small disc florets that are yellow at first becoming reddish or brown as they mature and elongate. The bell-shaped involucre beneath the flowerhead has small, pointed green bracts (purplish at the tips); both it and the stem are hairy and sticky (glandular). The plant grows a little taller than many similar aster species, over 2 feet. Its range is centered on the Great Basin, extending to the mountains at either side - from the Sierra Nevada to the Rockies. 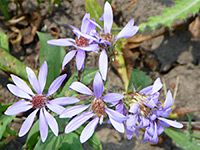