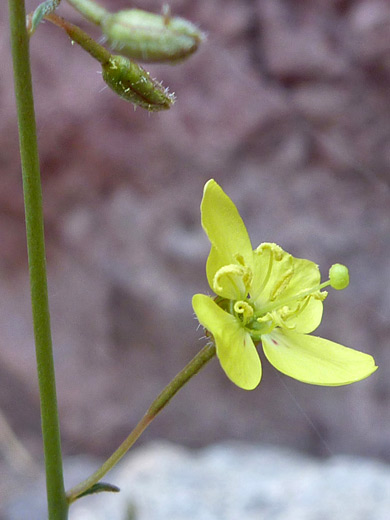 Four-petaled yellow flower - eulobus californicus in Gold Strike Canyon, Lake Mead NRA, Nevada
The leaves of eulobus californica are quite distinctive; they grow mostly at the base, in a flat rosette, have a mottled, grey-green color, and are pinnately divided into irregularly-shaped pairs of lobes, which have sharp teeth along the edges. Stem leaves are fewer, smaller, alternately arranged, narrowly linear in outline, and have wavy-toothed edges. Leaves and stem are essentially hairless. Stems are stout and erect, reaching heights of 4 to 5 feet.

The widely spaced flowers are produced on short stalks at the top of the stem and from the upper leaf nodes; they are formed of four lightly glandular-hairy green sepals and four oval yellow petals, with red coloration near the base - either a single dot or a row of small flecks. Petals are about half an inch long. The flower center contains 8 yellow stamens and a spherical stigma, initially green, becoming yellow when mature, and rising higher above the petals. 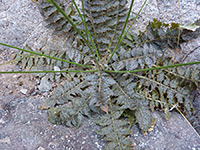 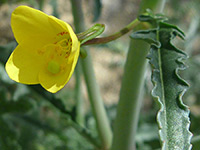 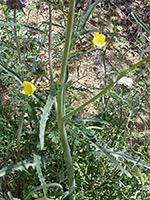 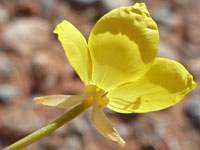 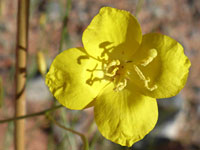